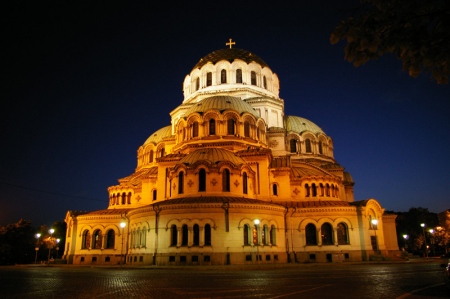 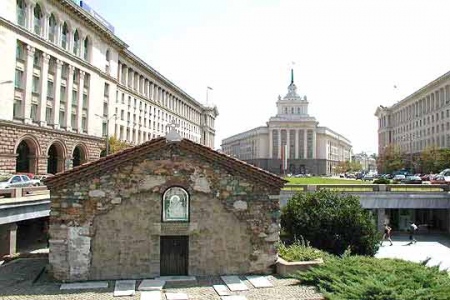 Sofia is one of the oldest settlements in Europe. For over 7,000 years Sofia has been a meeting place of the four directions of the world. Tribes and peoples came and went, civilizations flourished and declined but the city has stayed forever. Today Sofia is a modern and busy capital and a centre of Bulgaria’s political, economical and cultural life. Sofia has the convenience of a compact centre, where the main highlights can be visited on foot.

Among the most impressive sites are the Patriarch Cathedral of Alexander Nevski dominating the city; the church of St. Sophia (meaning "wisdom") which in the 14th c. gave its name to the city previously known as Sredets; the round church of St. George, or often referred to, as the Rotonda was built by the Romans in the 4th c. and is now considered the oldest building in Sofia. Other sites of interest are the Russian church of St.Nikolas, Banya Bashi Mosque, the ruins of ancient Roman Serdica, the buildings of the National Assembly, the University of Sofia, the National Library, the Monument of Tsar Liberator and more. Boyana church situated at the foot of Vitosha mountain, included in UNESCO World Heritage List, is also a must see in all visits of the capital. Its frescos dating back to the 13th c., painted 200 years before the Western European Renaissance, are a remarkable piece of art and have outstanding artistic value. 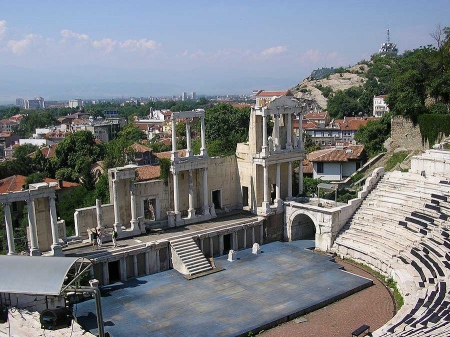 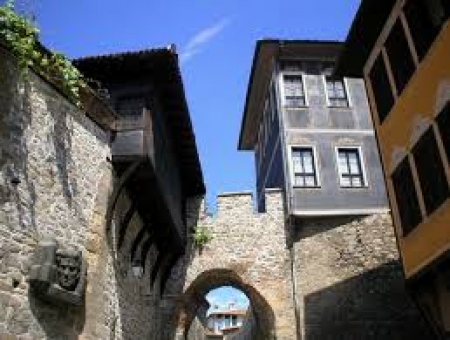 Plovdiv is the second largest Bulgarian city after the capital. Philipopolis (the town of Philip), Trimonzium (the town of the three hills), Puldin (the Slav interpretation of its Thracian name), the present day Plovdiv is a city with many names. It is one of the oldest settlements in Europe with millennium old history. It changed hands many times between Thracians, Greeks, Romans and later in the middle ages it was under the rule of Byzantines, Bulgarians and Turks. All civilizations have left their mark on the contemporary look of the city. Remnants from Roman, Ottoman and Bulgarian Revival period are to be found all over the town.

Among the most impressive sites is the Roman Theatre (2nd c). Built by the Roman Emperor Trajan it could accommodate up to 7000 people. Nowadays it is a popular scene for many regional and international festivals and events. The Roman Stadium is another impressive monument from Roman times. It is considered one of the largest structures of its time which could seat up to 30 000 spectators. Gladiators games in honor of the Emperor were organized on this site. Other monuments of interest from Roman period are the Forum (1st-2nd c.) as well as the Odeon (2nd-5th c.) - a  smaller scene for theatre performances in the antiquity.

The revival architecture of Plovdiv can be best seen in the old quarter of the town situated on three hills (Dzhambaz, Nebet and Taxim Hills). During the National Revival period Plovdiv was inhabited by many wealthy and educated people who travelled around Europe. They exchanged not only goods but also new cultural trends. So the newly rich merchants demonstrated their prosperity by constructing beautiful richly ornamented houses that became emblematic for the town. From this period worth to be seen are the Ethnographic museum, The Balabanov's house-museum, The Hyndlian's house-museum, the church of St. Konstantine and Elena, the church of Virgin Mary and more. 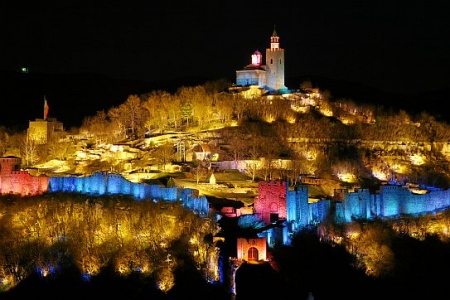 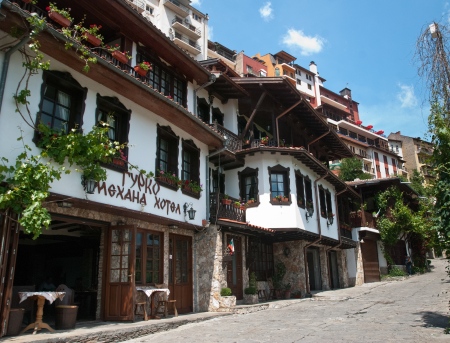 Veliko Tarnovo, or as the locals call it, "Tsarevgrad" (the city of the Tsars) was the medieval capital of Bulgaria in the period between 1185 and 1396. During the Middle Ages it was the most important political, economic, cultural and religious center of the Bulgarian empire. During the Ottoman invasion, the town was besieged for 3 months and the fortress was defended by the Patriarch himself. The city was razed to the ground. The Patriarchal Cathedral was totally destroyed along with a major part of the royal edifices. Tarnovo did not gain back its importance until the 19th c. when it was liberated from the Ottomans along with other parts of Bulgaria. In 1879 the first National Assembly convened in Veliko Tarnovo and ratified the first state's constitution which is the main low of Bulgaria up to nowadays.

The old city is situated on three hills - Tsarevets, Trapezitsa and Sveta Gora in the foot of which curve the scenic meanders of the Yantra river. A must see in each visit to the town is Tsarevets hill where are the remains of the former Royal Palace, the restored Patriarchal Cathedral as well as the ruins of many residential and administrative buildings. Baldwin's tower is part of  the fortification of the hill. The tower gained its name after the Latin Emperor Baldwin I being captured prisoner by the Bulgarian King Kaloyan and after he found his death here.

Other sites of interest are the historic hill of Trapezitsa, which hosted many beautiful buildings and churches; the Samovodska charshiya, which in the past was the main commercial street. Today visitors may watch artisans practicing their crafts according to old traditions and using original tools.

An attractive visit point in the vicinity of Veliko Turnovo is the village of Arbanassi with its fortress-like houses and beautifully painted churches, The Transfiguration monastery as well as the ruins of the Roman town Nikopolis ad Istrum. 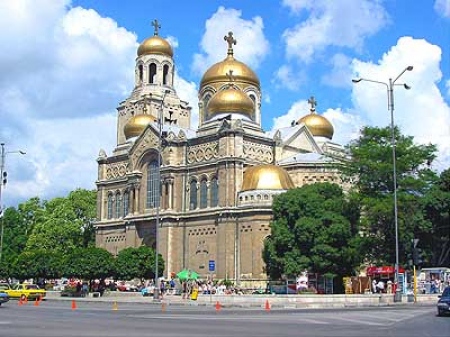 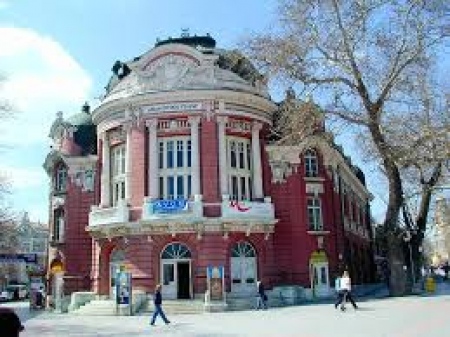 Varna is the largest city on the Bulgarian Black Sea coast. It has a millenium old history -  the oldest processed gold treasure in Europe was found in the area which at present date is exposed in the city archaeological museum. The town has preserved many remnants from the Roman times most impressive of which are the Roman Thermal baths in the very center of the modern city. Among the other famous highlights of the city are:  the remarkable gold domed cathedral dedicated to The Assumption of Virgin Mary, the Dolphinarium with its regular show attracting young and elder visitors from around the world, the marine garden being the working place of many charming street artists and musicians.

Being so close to the popular coastal resorts of Golden Sands, st. Constantine and Elelna and Albena, the town of Varna is extremely busy during summer. It is a traditional host of many summer festivals and music events. It is also the main port of naval and commercial shipping. 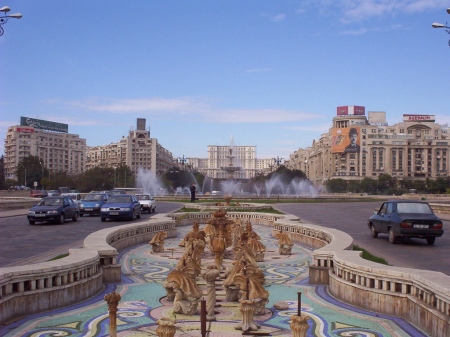 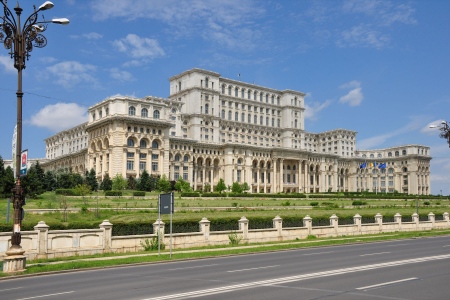 Despite the massive reconstruction of the 1980s, Bucharest remains a Garden City, leafy and pleasant, with cafes open on sidewalks in the summer, and with boats on its lakes and rivers. You will be intrigued by the city's eclectic mixture of architecture, from Curtea Veche, the remains of Prince Vlad Tepes 15th century palace - he was the city's founder as well as the inspiration for "Dracula", - to Orthodox Churches, Second Empire mansions, the stolid Stalinist architecture of the communist years and the colossal 6,000 room Parliament House, the second largest building in the world after the Pentagon. 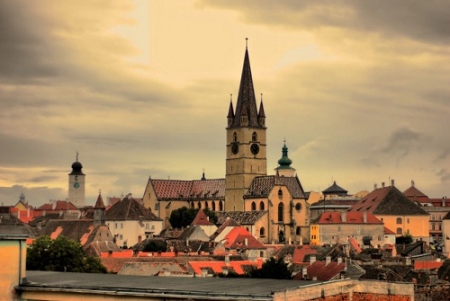 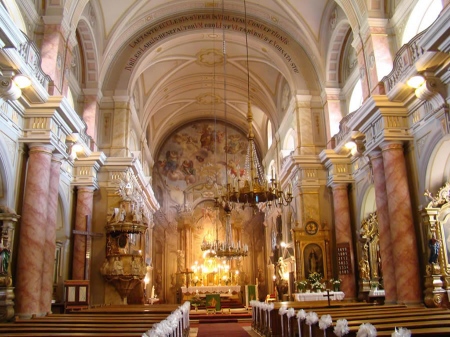 "I rubbed my eyes in amazement" wrote a traveler in Sibiu before the Second World War. "The town with narrow streets and old gabled house made me think of Nuremberg“, continued the same person. Sibiu also known by its German name as Hermannstadt and is located in the very heart of Romania. It is an old cultural center whose beginnings date back to 1192. The capital of Southern Transylvania, Sibiu was the most important of the seven cities established by the German colonists.

The original town was built in the fifteenth century and was protected by walls and brick towers, the buildings were joined by tunnels and narrow passageways, with heavily grated windows to cover the stairways and corners where intruders might be ambushed. Everywhere you look, there is evidence of Sibiu's historical past. In fact, the whole town breathes of history. The buildings are painted sky blue, red, apricot and pea green. And there are many cafes and restaurants, as well as a number of interesting churches and museums. Surrounding Sibiu are a number of lovely villages with fortified churches and rows of houses presenting a highly colored, but solid wall to the street."Marginimea Sibiului" - the villages around Sibiu are hidden in the mountains and the valleys. These communities are very rich in architecture, history and heritage and have resisted the ravages of time. Towards Fagaras, Tarnave and Sebes there are many wealthy Romanian and Saxon villages defended by fortified churches and with hardworking people.

SofiaPlovdivVeliko TurnovoVarnaBucharestSibiu
Contact us
+359 2 951 62 63 office@atlantictour.bg
News
Bulgaria opened its tourist information center in Shanghai Park of Miniatures opened in Veliko Tarnovo 3000 mountaineers on Cherni Vrah
Follow us on:
Atlantic Tour is a member of BCCCI (Bulgarian-Chinese Chamber of Commerce and Industry)